In the run up to the launch of LIA’s new edition on Sedition, Fly Us To The Moons on 6 September 2017, the artist will also feature an interactive generative piece on the Sedition site. The hypnotic digital artwork, WITHOUTTITLE, lets you create your own digital spiralling vortex piece by moving the mouse to shift the iron filing-style pixels. The work was commissioned by Processing in 2003 and has been presented exhibitions including The Guardian, online, 2014; Design Interactif, Centre Pompidou, Paris, 2003; and Abstraction Now, online, Vienna, 2003.

The Austrian artist is considered one of the pioneers of software and net art and has been producing works since 1995. Her practice spans across video, performance, software, installations, sculpture, projections and digital applications. In a short interview, LIA describes how her generative pieces are constructed:

“I started programming as an autodidact in 1995. Back then I worked mainly in Macromedia Director which was typically used to make interactive for CD-Roms, but it included a programming language called Lingo that I was able to (ab)use for my own creative ends. At the time I published some of the works on the internet as Net Art pieces including Turux and Re-Move. Technology moves quickly, so sadly these works no longer work the way they used to (aside from the Director plugin no longer being updated, to really have the intended experience you need a 640x480 CRT monitor and a dial-up internet connection).

In 2001, I started doing live visualisations for the Portuguese electronic music group called @c, which currently consists of Miguel Carvalhais and Pedro Tudela, both who lecture at the Faculty of Fine Arts, Porto University, Portugal. For a period of some years we collaborated intensively to build aesthetic connections between images and sound. These days we don’t have so much time for intensive research in this area, but we still work together on some projects. 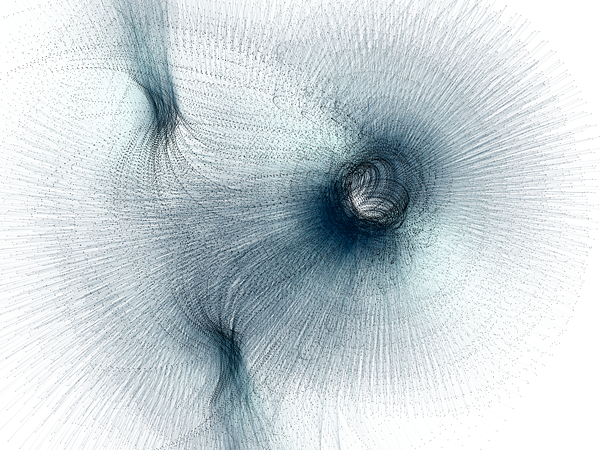 Recently, I have spent more time making videos than live performances, but the underlying software system and concepts remain similar. I approach each work as though it is an audiovisual collaboration, based on the techniques I developed for live music visualizations that I have built for myself over the years. In general I am not so much interested in producing "eye candy," but rather in expressing what I call "principles". By principles I mean the following: I see the whole world, social, cultural, natural, and every other aspect as being built on principles like attraction, repulsion, love, hate, longing, denying, gathering, spreading, collecting... there is an almost endless list.

When I create a new piece I have something like this in mind, that I want to express. Usually I begin by sketching with pencil and paper, and then I might program a few drafts in code, which at this early stage aren’t much to look at. It's like building a house: first you need the bare unadorned framework, and then later on you can focus on the details which make it look good. With each new draft in the programming process, I try to leave room for unexpected changes - if a change happens, and I like where it is going, then I might continue more in this direction; if I don’t like it, or if I reach a dead end, I take a few steps back and try something else.”