These Rocks Won’t Lose Their Shape: Interview with Katie Torn 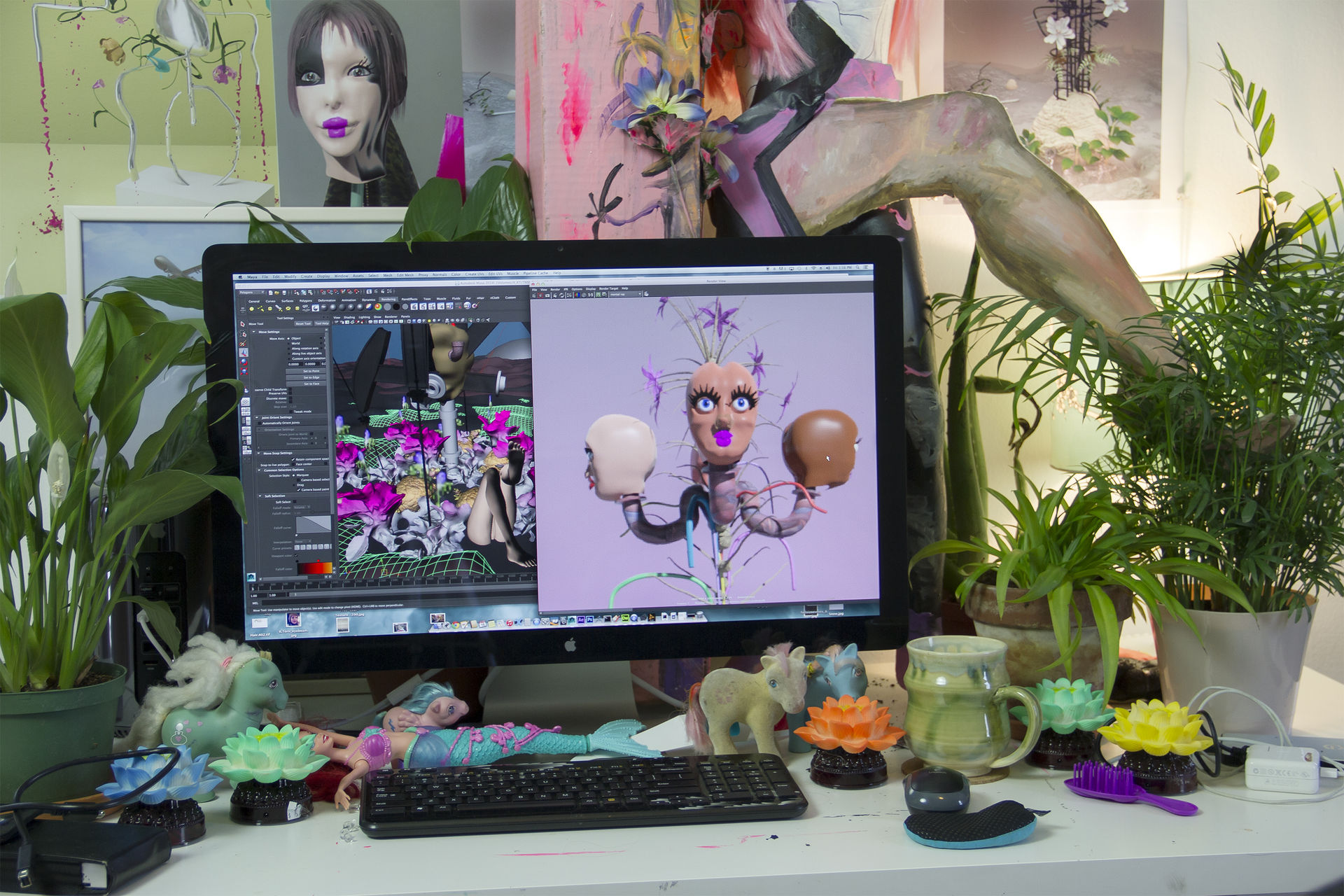 New York based artist Katie Torn’s new artwork These Rocks Won’t Lose Their Shape is a harsh yet beautiful observation on the digital world we live in. Torn uses 3D animation to cultivate political, feminist and environmental issues in her artworks. Her recent work typically employs the female figure to identify humanitarian issues of waste - often depicting the figure surrounded by human and digital detritus. Sedition had the chance to speak with Torn about the themes that occur within her work, and the elements of popular and internet culture that inspires her work.

Tell us about your new work on Sedition These Rocks Won’t Lose Their Shape?

Katie Torn: I got the idea for the piece when I was working for a corporate media company producing motion graphics. I was using a lot of stock footage, and I thought it was amusing how women are portrayed in many of the clips that I came across, especially clips labeled ‘attractive female’ or ‘sexy’. The poses and expressions of the actors are hilarious. Often, the depiction of stereotypical female beauty is awkward and dated. I was especially drawn to a clip of a woman posing on her side in a bikini on a fake beach, a stereotypical ‘beach babe’. The camera was so perfect in its objectification of the model, panning up and down her body and as the camera focused on her face she gives this dopey smile. I couldn’t resist re-creating it in a grotesque but beautiful way, my version of a ‘beach babe’ who is composed of all the plastic and waste we have dumped into the ocean.

You have an interest in using the ideal female figure, but portrayed in them grotesque and terrifying ways. What do you wish to express about women and our contemporary world?

KT: My aim is to be critical of how female bodies and seduction are used by corporations to promote a fantasy where consumerism has no repercussions. In my work I use these seductive qualities and special effects to draw a viewer in while simultaneously presenting a female body whose health and freedom has been jeopardised by toxic, corporation made waste. I identify with the figures I portray, they are an expression of my feelings that my everyday actions are tied up with a destructive process.

Are your works utopian or post-apocalyptic? How do you see the world you have created?

KT: The images and videos I create are observations of what I see happening in the world around me. I’m interested in using distortion and juxtaposition of elements that may seem contradictory to depict what I think is true. I like the post-apocalyptic interpretation but I see the worlds I create as a mirror to our current situation.

How did you get into 3D modelling and animation? What is your process of creating your works?

KT: I became interested and started incorporating 3D modelling and animation into my work as a graduate student at The School of the Art Institute of Chicago. At the time I was making a lot of sculptures in my studio that I would video tape and manipulate the footage in After Effects. Bringing 3D effects into the mix just seemed like the next natural step. Claudia Hart’s 3D animation curriculum at SAIC was perfect for this because she teaches 3D in an art context. My current process sort of grew out of combining my old way of working with the ideas we studied in her courses and the conversations I had with Claudia when she was my advisor.

My process is a little different for each piece. Sometimes I start by building a physical structure in my studio which I video tape, bring into the computer and continue to add forms in the virtual space of a 3D computer program. This is how I made the piece Breathe Deep. With other pieces I build the whole work in the computer, but the process is still somewhat the same in that I am building a structure, setting up objects in a space to be videotaped or photographed. The process is akin to set-up photography regardless if I am using a physical camera, or a virtual camera, or a combination of both to capture an arrangement of objects. The similarity in process between physical and virtual creates a nice bridge between the digital and physical realms.

What are some common themes in your work?

KT: The build up of plastic waste in the ocean, toxicity, environmental degradation, over saturation of images and information, and new forms of natural. Elements of nostalgia from my childhood often come into play as well as references to art history, especially painting and sculpture that depicts a deconstruction of the human figure in relation to technology.

What are you trying to uncover from popular culture / internet culture in your piece Breathe Deep?

KT: Breathe Deep focuses on a female character/ sculpture whose body and identity have become confluent. Her consumption and consumer waste output are looped. With the piece I was wanted to make a connection that the choices you make as consumer not only build your identity, but also effect your body and the other bodies around you directly and indirectly.

We see recurring motifs in your work - liquid pouring from eyes, Barbie dolls and toys, liquid or smoke running from pipes, rainbows and bright colours, animals and flowers? Can you tell us how you came to imagine this world and aesthetic?

KT: I think I have been programmed from a young age to experience bright coloured plastic as desirable. I watched a lot of TV as a child in the 1980’s and had deep creative experiences with plastic toys. It feels right in my work to try to express my first experiences with seductive advertising. The virtual sculptures I create are also like bio-mechanical systems that are beautiful but create toxic waste. Liquid can be interpreted as a life force or toxic substance. Tubes are pathways for a body or machine or communication, like the stems of a plant.

My work is influenced by grotesque ornamental designs that merges together images of plants, humans and animals. I like to imagine what a contemporary version of this would be that incorporates the chemical and digital.

What can we expect from the group show at XPO Gallery - Les Oracles? Who are some of the other artists involved?

KT: I’m really excited for this show! Its an exhibition of ten female artists whose work is influenced by science fiction curated by the artist Marisa Olson. The show includes paintings from Jeanette Hayes, video work by Saya Woolfak, prints by Brenna Murphy, video installation by Kristen Lucus, sculpture by Katja Novitskova. There is also a short story included in the catalogue by Claire L. Evans.

Tell us how you work in your studio and gain inspiration for a new work?

KT: My studio is setup to allow a seamless workflow between digital and physical media. I work on my computer, paint and build sets, print stuff out, and take photos and videos all in the same space. My studio is modular and changes depending on what I’m working on. I gain inspiration from looking at a lot of images, videos and reading a lot of articles online. Also, working with physical materials in my studio, and dissecting a piece that I have already made or thinking about how it take on a different form inspires a new work.

In the studio with Brian Alfred